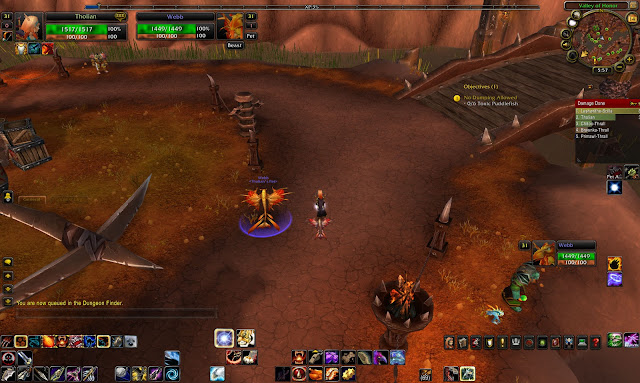 I’m pretty sure my time in WoW for the next few months is limited. I’ve pre-ordered Old Republic, it’s paid for, and I’m just waiting for a beta invite.  I’m fairly certain I’ll spend quite a bit of time establishing myself over there.

A week from today is Blizzcon, and they’ll almost certainly announce the next expansion.  But it won’t be out in December.  I’d guess at least 6 months – more likely a year – is the time we’ll have to wait for the next major content patch for WoW.  Until then, we have only one patch to hold us over until then, and the big thing in that is the Deathwing raid.  I’m not a raider.  Leveling alts is about all I have left to do in the game until the next expansion.  Blizzard knows TOR is coming out, and they’re entering the between expansion lull, so will they just let things slide, or will they announce something big and surprising?  I still love the game, but two years between expansions is just too long.  I’m sure I’ll be back in WoW when they add some new content, but they need to step up development cycles, in my humble opinion, so I’m betting TOR will be my new gaming home.

So, until I get that beta invite, I’ve started leveling a hunter alt on Steamwheedle Cartel.  Tholian (with her pet named Webb) used to be my bank alt, but I dusted her off, gave her some heirlooms, and got her from level 28 to 32 last night and this morning. Totally re-learning how to play this class!