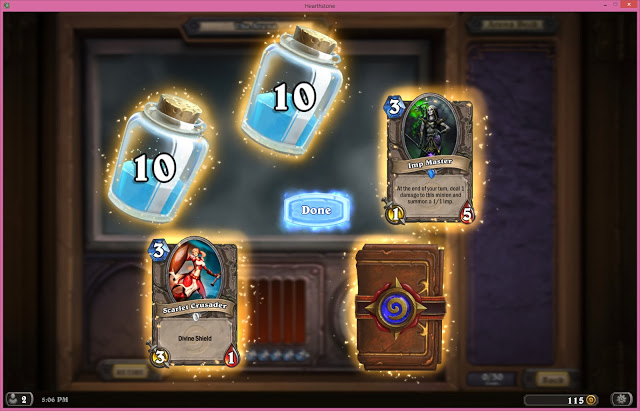 I played a bit more Hearthstone yesterday, clearing a few quests, and made enough gold to pay the 150 coin entry fee. The arena is sort of like a booster draft, so everyone has an equal chance to build a deck from a good assortment of cards. You don’t get to keep them at the end, so they give you some pretty good choices. Play ends after 3 losses, and your random rewards grow with each win you score. You’re guaranteed a pack of cards even if you win none at all, so it’s not a bad deal at all.   2 wins in the Arena I’ve been tweaking some of my other constructed decks with the cards I’ve won, and I can pull a few wins here and there. It’s pretty fun for now! Kicked some paladin ass

The next game on the horizon I’ve got my eye on is Wildstar Online. It’s probably got game-play very similar to WoW, but it looks like it has a really fun style to it with a lot of humor, which I find very appealing. It’s almost cartoon-like in appearance, which to me is better than trying to go for a very realistic look. Sort of like a Shrek movie with a bit more adult humor. I’ve applied for a beta invite, but nothing in my inbox yet. I have a few days left on my WoW subscription, but I haven’t really done anything there in a few weeks. I just want something really new and different, and while I’m not sure Wildstar will fulfill that, I’m willing to give it a shot. In the past, there have been some betas that really turned me off to the games, like Rift and Warhammer. I came to see very quickly that they were just World of Warcaft re-treads with some slight differences. Wildstar could be more of the same, but I see a real hint of fun that the others were lacking.

I finally secured an invitation to the beta for Blizzard’s new game, Hearthstone. I’ve played Magic: the Gathering for many years, so I’m very familiar with how collectible card games work, and they’ve done a great job at bringing the format to the screen. Probably a much better job than Wizards has done with Magic Online. It plays fast and is very easy to learn, with all of the concepts taken directly from World of Warcraft. There is no trading or selling of cards in this game, so you won’t see the gold farmers migrating in to make cash from this one. It also reduces the chance of people only buying the best cards in the game to use against you. You’ll still be at a disadvantage to people who have spent cash, but players won’t be buying packs only to flip them for cash. One aspect I do like is the ability to disenchant cards you don’t want, turning them into dust, which you can then use to create cards you specifically do.  You can play for free, but you also have the option to buy packs and arena tickets with real money. You don’t need to buy them, but collecting them from currency won in the game itself will be painfully slow, and you will be facing opponents who have much better decks than you do. It seems fairly fun, and to drop in and just play a few hands at any time will be nice. I just don’t know how much long term enjoyment there will be, as some of the more complex mechanics from Magic are not there, so it may get somewhat repetitive after a while. It’s free, so there’s no reason not to jump in, at least for a while and try it out. The Battlenet friends list is fully integrated, so you can play against your friends easily enough. I’m also playing Magic 2014 on my tablet, which is mainly a single-player experience, but it really offers some great game-play.

I’ve been away from Wow for an entire month now, and am not really missing it all that much. There are some stray thoughts now and then, and I’m sure I’ll drift back in at some point, but I’m thinking I might start fresh if I do, with a new character on a new server. If I had people who were doing the same thing and wanted to play together, I’d jump back in at any time, but I don’t care about poking around in Azeroth by myself at this point in time. It would have been nice if Blizzard could have done smaller, yearly expansions to give us something fresh on a regular basis, as two years is a long time to drag each release out. The patches are okay, but they aren’t enough to keep me going. The end raids are fun, but aren’t the biggest draw for me, and more dailies just doesn’t cut it. I like exploring and leveling, so when I come back, I’ll probably do some of that.

I’ve gone and cancelled my World of Warcraft account again. I’m sure at some point I’ll come back, but this expansion has been a bit frustrating for me. There was a lot to do, no doubt. Pandaria is a beautiful continent with a lot of explore, and full of lore. The route they chose for the end game this time around, with so many reputation grinds before you can buy anything, and all of it through dailies is really tedious, though. I like playing alts, and running all of that again on another toon is just not going to happen. In Cataclysm, I had my army of alts all set up for crafting. I leveled them all up, and then worked on professions, and had a blast using them all together. All of the end game patterns are locked behind the dailies and the reputation grinds now, which is just not as fun for me. I love how they’ve broken down the walls between servers and let more people play together, but it’s just become a big grind, and I don’t feel like doing it anymore. So, Skulfrak is parked for now. Some day he’ll come back, and maybe put Garrosh in his place. I still have Diablo 3, and Old Republic is free-to-play, so I may dabble with that here and there. I don’t see that much on the horizon that looks all that exciting, though.

In the gap between WoW‘s Cataclysm and Mists of Pandaria expansions, I took some time to indulge in a slight distraction, also from Blizzard – Diablo 3.  I have the annual pass for WoW, so it’s not costing me anything to play, and I don’t have to stop playing WoW to do it.  I heard complaints of many people experiencing errors and crashes in the early launch days, but my experience has been flawless, with no problems at all. I rolled a demon hunter, and got to the upper 20s, and started a witch doctor.  Both classes were a lot of fun, with some very unique abilities.  It’s a bit hard to adjust my play-style, with so few hot-bars available and multiple resources to manage.  I’m used to having a spot for every spell I learn in WoW, and having to pick only a few to use, and balance my abilities out took some getting used to.  I also had to adjust specs for single and multi-player, as well as boss fights. It’s easy to drop in to the game, click a few buttons, and start killing things.  You have access to action almost immediately, so when you just want to pop in, kill things for half an hour and leave, you can do so.  I like that there’s no tank/healer/dps roles like so many games have now.  It’s also refreshing to not have a damage meter going for everyone to stroke their epeens with. Grouping is easy.  Playing with friends is a breeze, and seeing who is online and what they’re doing through the Battletag and RealID system has never been better.  I had some trouble with a few bosses, and I just set up to join a multiplayer game with people on the same quest I was on, and boom – instant group, and we tore the place up.  The loot system, where anything you can see is yours to pick up, is a nice feature, and area looting has been implemented.  When you’re not grouped, you can choose to partner with one of several NPCs that compliment your main character. Your stash chest is shared between all of your characters, so if you find a piece of gear your alt can wear, you can hand it down to another toon with ease.  Things aren’t soulbound like with WoW, so when you’re done using something nice, you can hand it off to other characters or sell it on the auction house.  After years of dealing with WoW’s soulbound items, this was kind of neat to see. I don’t care much for the auction system.  The entire population of the game shares one massive database, and you’re limited to only posting ten items at a time.  It’s hard to know what price to list items at, and while I have found a few better pieces to wear, it can be rather expensive.  I’m not that far into the game, but it’s a little intimidating. All in all, it’s a nice change of pace, but I found it really lacks the depth to hold my interest long term.  It’s still there, though, and I can pop in any time I want for quick fun, so I’ll keep playing on occasion.

I got my early access invite to The Old Republic yesterday, and had just enough time to make a few characters. My new main is a Jedi Consular named Olias on the RP server Vrook Lamar.  This morning I got him to level 3, taking it nice and slow.  For me, I like to absorb all the details and not rush through the first time I play a game, so this should keep me busy for quite some time.

I’ve started my own Zazzle store! A lot of my artist friends have been selling things there, so I decided to try my hand and see if things actually move there or not. create & buy custom products at Zazzle

Patch 4.3 has gone live, and the first thing I did was visit the Transmogrification guys to get my gear redone.  It turns out I have a lot less things in my bank than I thought I did.  All my major toons had some things to improve upon.  My main, Skulfrak, had a full set and looks pretty badass. I spent about an hour doing that.  For the rest of 4.3, I’m not going to be killing Deathwing, so no interest there.  I have a few new 5-man dungeons to kicked out of for having shitty DPS and not knowing the fights.  Other than that, 4.3 doesn’t really give me a whole lot to do, and there are no more patches on the horizon until Mists of Pandaria comes out.  I’m sure that won’t be any sooner than six months – probably closer to a year away. Good thing Star Wars: The Old Replublic head start goes live in 15 days!

The big weekend beta is over now, and I had a blast getting my first experience in The Old Republic.  In the last hour, I abandoned my mission (so as not to spoil the story) and headed off-word, making my way to the Republic fleet, and then to Coruscant.  It was all very well done, but I only scratched the surface of what’s in the game.  Still so much to see! I don’t any other beta approvals yet, so it’s back to WoW for a few weeks now.