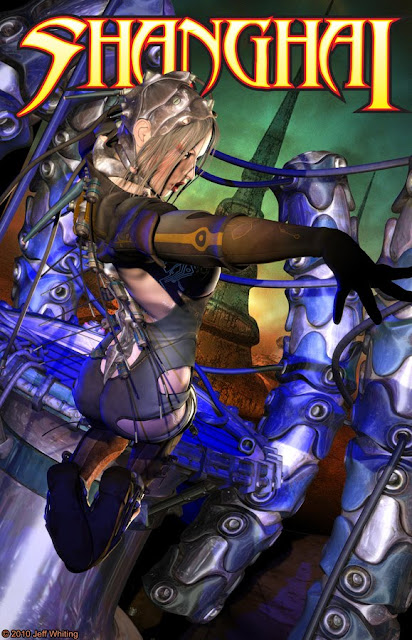 I’ve been wanting to get back into mainstream comics for quite some time now. I have lots of new material in various stages of production, but have been unsure about how to get it into the hands of readers in a way that would make a modest amount of money and not be easily duplicated and passed around illegally on the web.

I bought a set of markers last night, and did some drawing, which I’ve not done in a long time. I was intending the resulting art piece for eBay, but I was disappointed with what I ended up with. It’s frustrating, because I’m trying to duplicate on paper what I can do with my art software on the computer in a fraction of the time. The digital art looks much better, but I can’t sell it as an original in an auction.  It just seems like a lot of time and effort to sell to one customer.  It feels like I should be working to a larger audience.

Back in the 90s, I self published a few full-color comics of my own.  Paper printing is pretty expensive, but I think I finally found an option that will get me back into print at almost no cost, and no risk. There are several print on demand services that will custom print in small numbers – like 10 books if you want, or hundreds. It’s not the quality of Marvel & DC, but it gets you a handful of books, and they also have an online store that only prints what they sell. It’s basically a method to get some material in print so a bigger publisher will notice you. And if I get a small stack of books done, a trade-paperback is easy to do the same way.  I don’t have to pay for 5000 copies and hope the major distributor will pick it up.

I’m still researching, but I think this is what I’ve been looking for. I get to do my own thing, have it in print, and I can go to comic shows with a small stack of books to peddle. I can be an independent publisher for very little investment or risk, which is perfect. It also has the possibility to open doors down the road.

I’m going to sift through all of my years of artwork tonight and see if I can come up with enough material to do an “Art of Skulfrak” book.  I’ve always wanted one of those!  The Shanghai series will be back in print now as well, and I have lots of other concepts waiting in the wings.