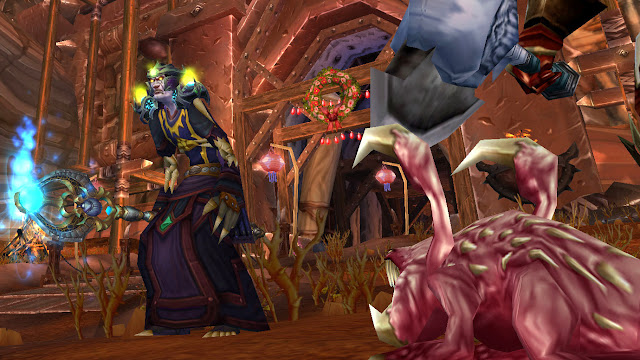 Patch day was yesterday, and things look to be better for some of the end-game content, so I set aside my worgen project to dust off my main warlock, Skulfrak, to try things out.

The horde actually had Tol Borad on Steamwheedle Cartel, which I never saw before.  It’s been a month since I played Skul, so I’m not sure what the recent trends are, but I’ll be watching closely to see what the TB trends are, as that was one of my issues with the current state of the game.

I sold a bunch of old archeology grays I had in my bank, and was happy with the new vendor prices.

I was able to make it through a heroic dungeon, and died during the last boss fight, but the group stayed together and finished it, and I won a new blue staff, so Skul’s gear got a little better and he earned some valor points.

I did a random battleground this morning, and the horde just didn’t have it together.  They’ve combined a bunch of battlegroups, and our new stock is really lacking.  I had the flag in Warsong Gultch, and my teammates ran right past me to fight in the middle, rather than escorting and covering me, and I was hunted down by two allies in our own base and killed, giving the other side a score.  They weren’t even paying attention to the fact that there are flags in there, and winning the match gives bonus honor.